The Hubble Space Telescope image above is of the region surrounding the star V838 Monocerotis. V838 is the large orange-red star, which lies about 20000 light-years away towards the edge of our galaxy. The naming of this star betrays it as a variable star, the 838th found in the constellation Monoceros. This star is of intense interest to professional astronomers. 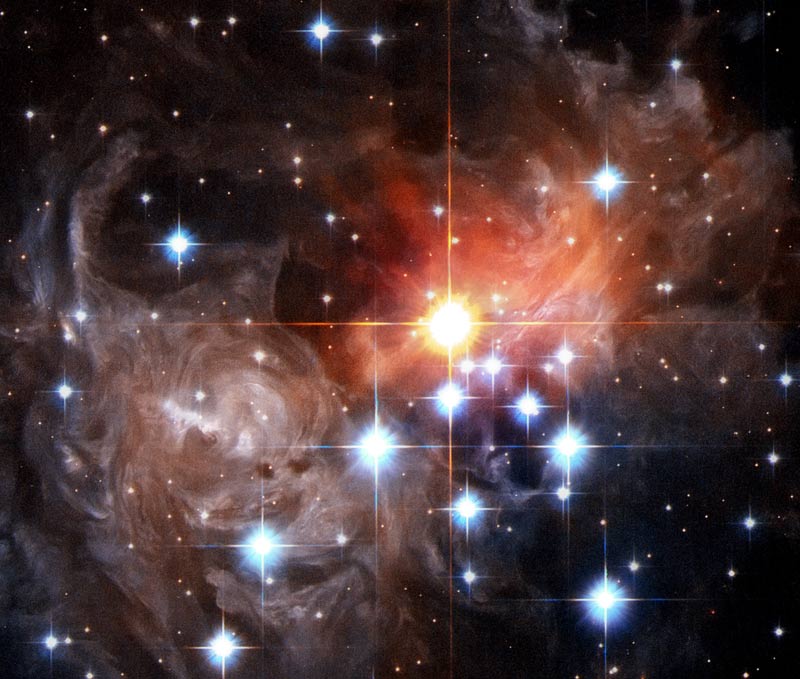 The full image from September 2006 can be seen to the right (click for larger image). The current outburst of this star was first noticed by an Australian amateur astronomer, Nick Brown, on 6 January 2002. Nick was, as many amateurs do, surveying the sky photographically looking for novas and noticed a 'new' star on his images. At first the star seemed to be a typical nova but in mid-February it staged a massive 60-fold brightness increase, faded, and repeated to performance in March. It has been fading ever since. 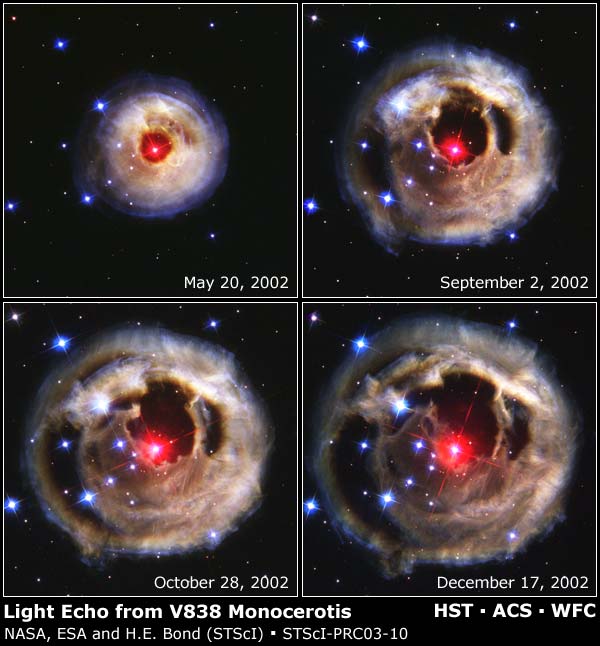 The Hubble Telescope has imaged this area over time. The evolution of the illuminated area is highlighted in the image to the left. The bright dust clouds are seen because they reflect light that was emitted by the star's outburst. The cloud appears to grow as the light moves progressively further from the star but the dust itself is not moving at any substantial pace; it was in-situ at the time of the outburst, perhaps ejected by the star at a much earlier stage. The effect is called a light echo in direct analogy to a sound echo rolling off objects at varying distances (think roll of thunder).

When professional astronomers identified the progenitor star as an F-class, 15.6 magnitude star with no history of variability the truly unique nature of V838 became apparent. This star has gone from a yellow star, a little heavier and hotter than the Sun, to a red giant in the space of a few months. Typically we would expect such a transition over periods of millions of years. There is certainly some good physics to explore here, and that's why I find these images interesting.