On June 28, 1997 the Galileo spacecraft was directed to take a series of photographs of Jupiter's moon Io. Of interest were the volcanic features glimpsed by the two Voyager spacecraft as they flew past nearly twenty years earlier in 1979. The image above is an extract from the resulting mosaic image showing a volcanic plume rising above the edge of the moon. 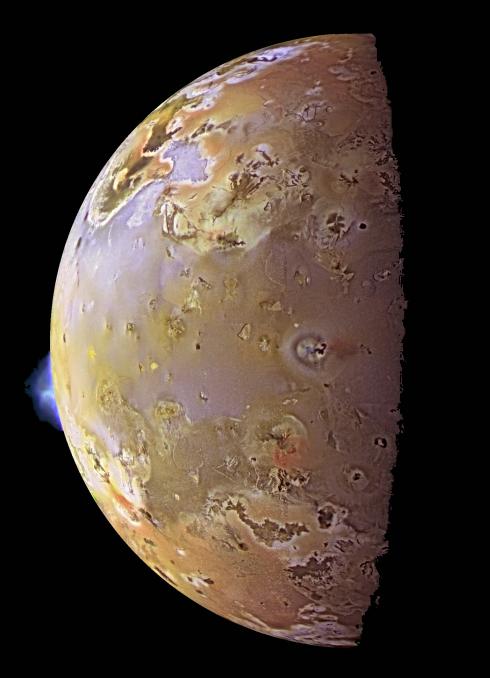 There are two plumes in the full image (left, click for larger view).
The first and most obvious is the bluish cloud rising from the limb of the moon. The cloud protrudes about 140 km above the surface in a region called Pillan Patera (a caldera or volcanic depression).

The second volcanically active area is near the image centre and the boundary between light and dark. It is a light coloured circular feature with the shadow of the plume trailing away to the right (reddish shadow). This is the Prometheus plume, which has probably been active continuously since the Voyager images.

The discovery of volcanism on Io was entirely unexpected. A body as small as Io was expected to be dead and cold, having long since lost its internal heat to space. The diameter averages 3650 kilometres, but the moon is distorted from spherical by the gravitational effects of its close proximity to Jupiter. Just as the Moon raises tides on Earth, Jupiter raises tides in the body of Io. The kneading of the moon's body causes heating which is probably the driver of the volcanism we see.

The colours present in the plumes and on the surface of Io are mainly due to the presence of large amounts of sulphur in the volcanic ejecta. Sulphur is ejected as 2-atom molecules of sulphur gas. After the gas settles near the surface and starts to cool it solidifies into 3- and 4-atom sulphur molecules giving a reddish hue. Slowly the molecules rearrange into a stable 8-atom ring that gives the familiar yellow colour of sulphur.

To me this image embodies the excitement of discovery of the completely unexpected. In 1977 nobody was seriously expecting to find volcanic activity among the icy outer bodies of the solar system; yet here they are. Voyager also discovered examples of volcanism on Triton, a moon of Neptune. Our solar system continues to surprise us.