The image is an excerpt from one of the most spectacular Saturn images I have seen. It was snapped by the Cassini-Huygens mission to Saturn on 15 Sep 2006.
The image is an enhanced composite of images taken over a twelve hour period as the spacecraft passed through the shadow of the planet. The Sun is backlighting the planet, throwing the rings into a new light and providing scientists an opportunity to study them in new ways.

The unenhanced image can be seen to the right (click for larger version). In this image we can clearly see ring (annulus) of light around the planet's edge caused by sunlight being refracted (bent) through the outermost atmospheric layers toward the camera. The ring system, Saturn's most distinctive feature, is brightly lit and clearly visible beyond the extent of the planet. Where the rings pass in front of the planet they appear dark, obscuring the weak illumination of the planet's dark side by light reflected from the rings. The broad, dark band in the rings is visible from Earth in modest amateur telescopes and is called the Cassini Division after its discoverer Giovanni Cassini. The Cassini division was thought to be a vacant gap between the A (outer) and B (inner) rings. Just inward from the very bright edge of the ring system (F ring, discovered 1979) is the Encke Gap named for Johann Encke. Near the planet's lower left edge is a bright spike that hints at another ring, and below the planet is a faint blue streak that one could be forgiven for thinking was some kind of lens flare.

The image truly comes alive when the brightness levels are adjusted (left). The Cassini Division no longer looks like an abrupt break in the rings as more, faint, rings appear in the 'gap'; their locations dictated by orbital resonance with Saturnian moons. The bright spike has resolved into a ring (G ring) discovered by the Voyager mission in 1980-1. The pale blue streak is fully illuminated, betraying its nature as a full ring (the E ring, discovered 1966). The character of the reflected light tells us that E ring differs from the majority of the rings; it consists of diffuse microscopic particles rather than larger lumps of ice and rock. The source of this material is thought to be volcanism on the Saturnian moon Enceladus which orbits within the haze. New rings, not easily visible in this scaled image were discovered by Cassini scientists in this image data ("Janus/Epimetheus" Ring between F and G, and "Pallene" Ring betwee G and E).

Spectacular as the image of Saturn is, the thing that really tugs on my sense of wonder is an almost insignificant dot called the Earth that makes an appearance just inside the G ring in the centre-right. At the time this image was taken Cassini-Huygens was about 2.2 million kilometres from Saturn and 1.5 billion kilometres from Earth. A similar image, in which the Moon can be seen as a bump on the side of Earth is here. 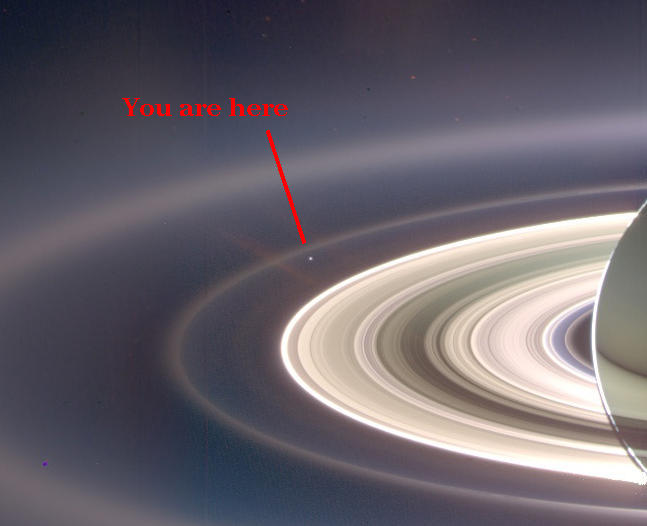 Read more about the Saturn ring system at Wikipedia.