I recently had the pleasure of attending a friend's birthday party (Thanks Kate) with another friend (Dane). During conversation Dane asked about the meaning of the images on the front of his tee-shirt (right). Dane had figured that parts of the imagery were related to the zodiac and the months of the year. What wasn't clear was whether the device in the middle of the circle was just a meaningless ornament, or something of astronomical interest.

The outer circle of the image on the tee is marked in French with the twelve months of the year. Inside that ring is the inscription 'Orbite ou route de la terre autour du soliel' meaning something like 'Orbit or road of the earth around the Sun' (Soleil is the modern spelling). The other marking 'Sytème de Ptolemée' indicates that the diagram is of the Ptolemaic System (or geocentric system). The four circular symbols at March, June, September, and December depict the Earth, its equator, tropics and polar circles, and its orientation to the sun at this time. 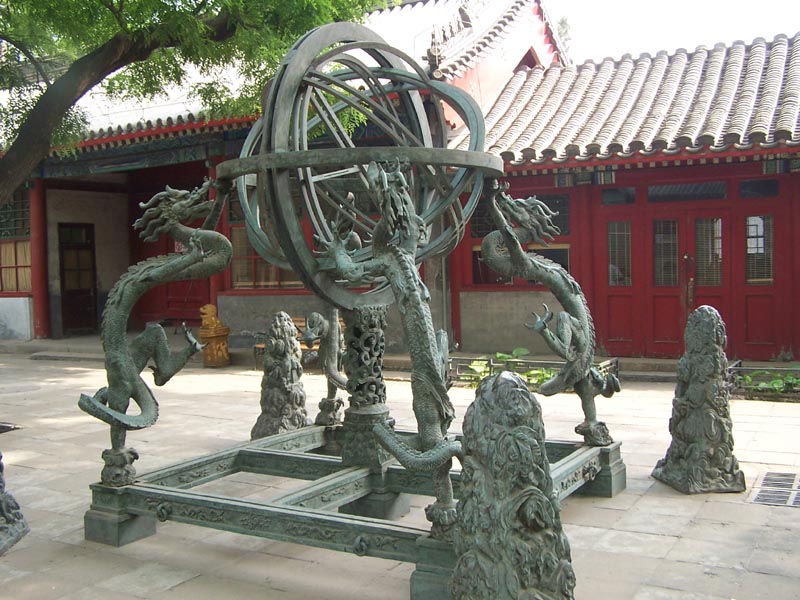 The device in the middle is an armillary sphere (a term that escaped me on the night). The armillary does indeed have an astronomical purpose in that it is an abstract representation of the sky and the paths of objects in it, particularly the Sun. The armillary was developed by the Greeks around the third century BCE, and the Chinese around the first century BCE although simpler devices existed prior to this. The device can be used to make astronomical measurements of star positions, as the ancient Chinese, Greeks and Ptolemy did, or as a navigational aid. Many armillary spheres have a purely instructional purpose, demonstrating the relationship between various points, planes, and paths in identification of points in the sky. Armillaries are fairly common as purely ornamental objects. 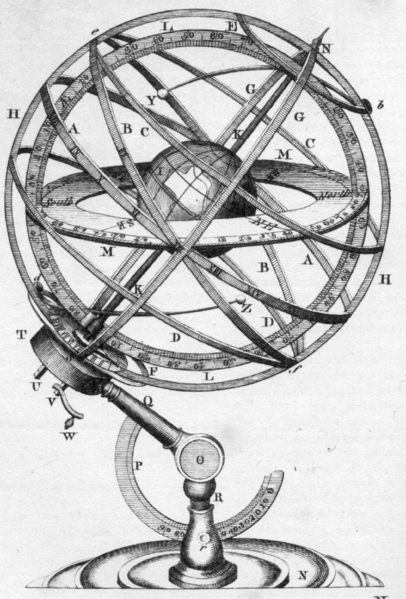 In early armillary spheres the object at the centre represented the Earth because everybody knew the Earth was the centre of the Universe. Some later spheres depict the Sun at the centre after the Copernican view. The Earth is supported by a rod that forms the north-south axis of rotation and points to the north and south celestial poles. Surrounding the central object are a series of rings of various sizes and orientations and sometimes an object representing the Moon. The exact numbers of rings vary from device to device although the major ones are always present.

The rings can be divided into two groups; the great circles and others. There are typically five great circle rings:

Often a disc is present to represent the local horizon of the observer (Label M). The sphere can be mounted on a movable stand (as in the diagram) to allow it to be tilted and rotated for use at various latitudes and times.

Smaller rings are mounted to represent:

The armillary sphere also makes a stylised appearance on the Portugese flag. Officially it symbolises the seafaring prowess of the Portuguese throughout history and particularly during the reign of King Manuel I (1495–1521) when Portugal was a major maritime leader. Astronomical observation and instruments like the armillary has a long history in navigation, particularly at sea where there are no landmarks. The sphere also features prominently in Portuguese Manueline architecture.

Want to build yourself an armillary sphere? Try here.