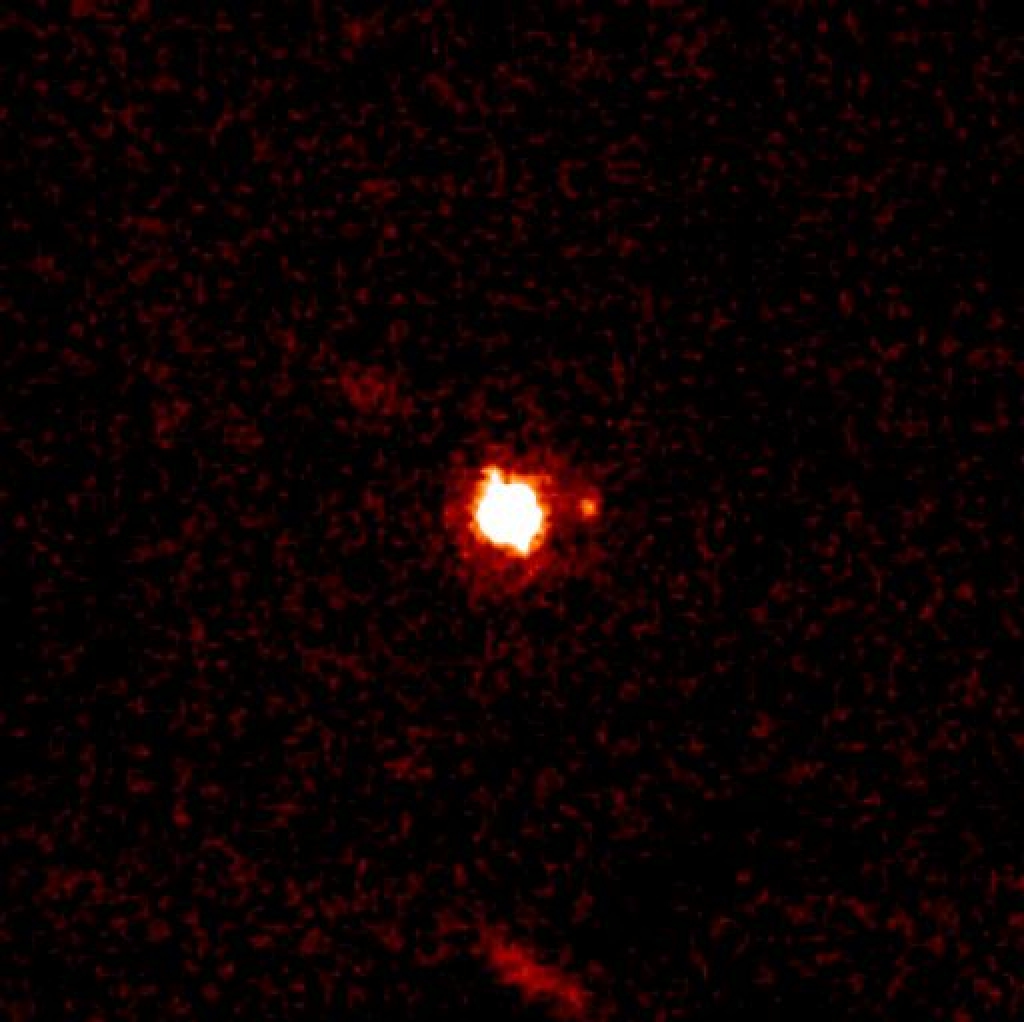 The image above was taken by the adaptive optics team at the Keck Observatory during 2005. It shows a distant Kuiper Belt object known at that time as 2003 UB313, and a small companion object. Despite poetic naming not being an astronomy strong point the discoverers of 2003 UB313 [1] had unofficially nicknamed the object Xena (in the Greek gods theme of planet names). The Keck astronomers, somewhat tongue-in-cheek, nicknamed its companion Gabrielle after the TV show sidekick of Xena. :) As time goes by we are learning more about these remote solar companions.

Now officially named Eris, 2003 UB313 was initially estimated to be \(3000{\pm}400\) km across [2] based on the heat radiated from the body and some assumptions. Later Hubble Space Telescope observations of Eris as it occulted a star (More on occultations) allowed the size estimate to be refined to \(2400{\pm}100\) km [3]… very similar to Pluto. In the image Eris can be seen to have a satellite (moon) of its own; now named Dysnomia. Dysnomia has a diameter less than 150 km. The discovery of a moon opened up a way to determine just how much mass is in the main body. Weighing the moon was done by accurately measuring the time taken for Dysnomia to orbit Eris and their separation, in this case 15.7 days and \(37350{\pm}140\) km. The needed measurements were completely only recently [4]. Application of Kepler's laws of planetary motion, particularly the general form of the third law (thanks to Newton), allows the mass to be calculated: \(1.67{\times}10^{22}\) kg. Eris is almost 30% heavier than Pluto but about the same size.

You might recall the hubbub surrounding last year's International Astronomical Union (IAU) decision to put a definition on the term planet (PDF). The fact that Eris was initially assessed as larger than Pluto (2390 km), and that there were likely to be many more objects like it, partly drove the need to define planet. Pluto, the last planet to be discovered, was relegated to the new category of dwarf planet to join the asteroid Ceres and Eris.

The ways that astronomers have found to gather information about things they cannot even hope to get close to never ceases to impress me.