Jupiter: See it for Yourself

The sixth of June is a magnificent time for those with a nascent interest in astronomy to get out and see the largest planet in our solar system. The planet is reaching opposition, making it visible all night. You don't need any great equipment to get an experience similar to the one that Galileo had when he discovered the moons. Essential equipment:

Read on for help with the last item (at least for Brisbane, Australia) 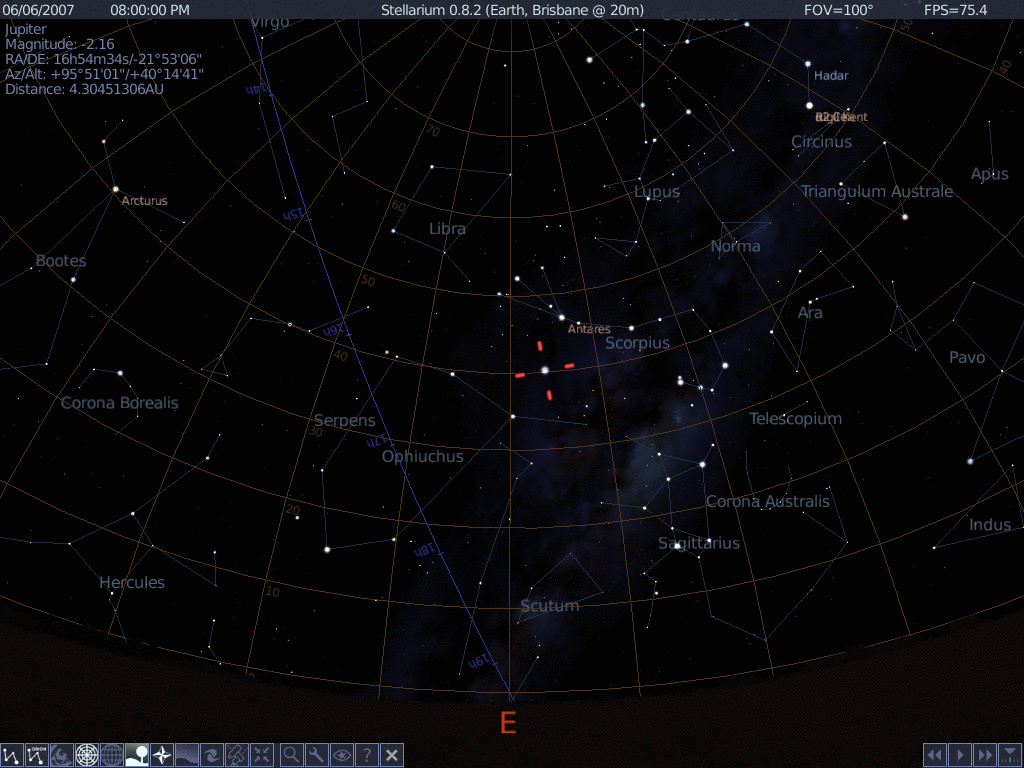 Finding Jupiter in the sky tonight could not be easier. Face east at about 8 PM after giving your eyes about ten minutes in the dark to adapt. Look about 40 degrees above the horizon for the brightest 'star' in the area. You can use the map to help orient yourself (click for larger version). The reasonably easily identified constellation of Scorpius lies slightly higher in the sky. Train your binoculars on that 'star'. 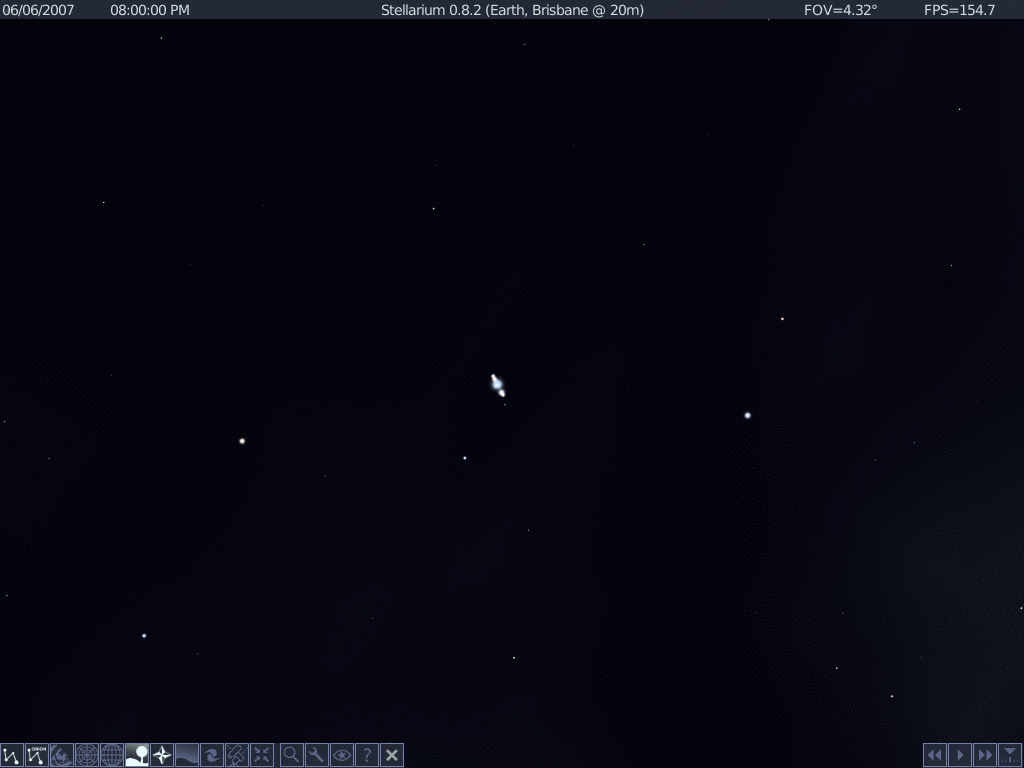 With a modicum of luck you will see a small bright disc with a line of small dots around it. These dots are some or all of the Galilean moons: Io, Europa, Ganymede, and Callisto. The diagram above gives you some idea of what to expect in binoculars. With binoculars you will not see colour or the bands on the planet's surface, and you might not see the innermost moon (Io) which is easily lost in the glare of the planet.

The diagram below is a telescope view with moons labeled. 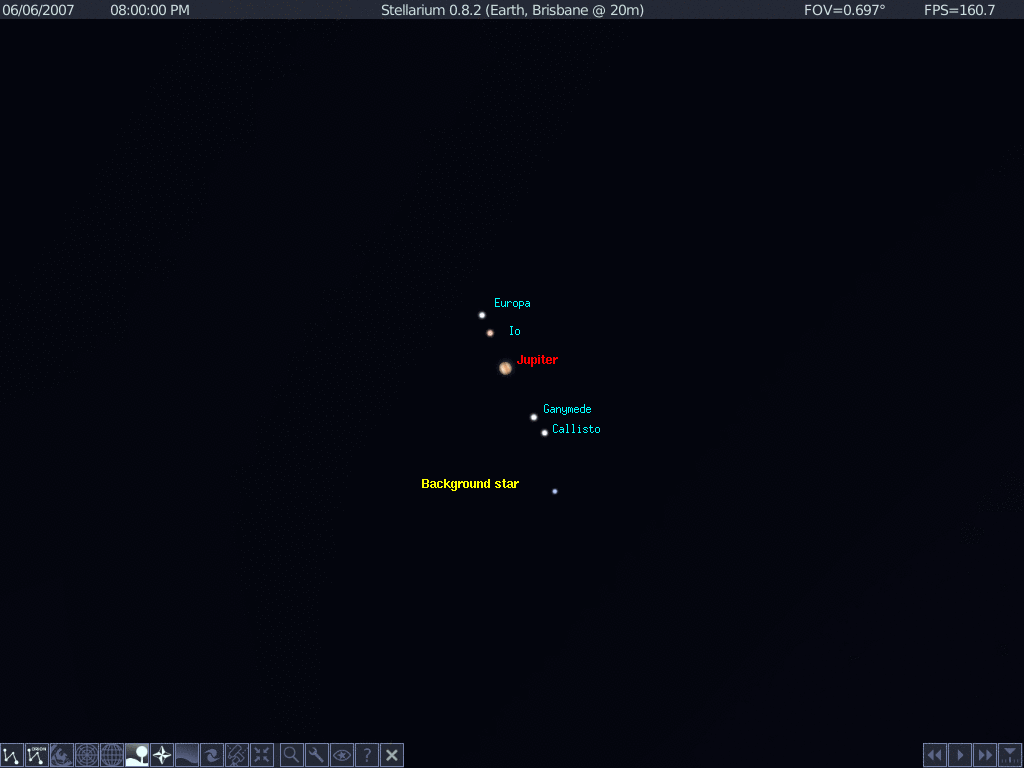 What Galileo noticed is that the dots moved while he watched, but they never moved too far from the planet. By watching the planet over a period of a couple of hours you will see the dots moving. Io takes a just 42 hours to orbit Jupiter once, so it is feasible to see movement over a single night's viewing. Europa takes 85 hours, so movement is quite easily seen from one day to the next. If you are particularly observant you may notice that the planet has moved against the background stars from one night to the next.

The video above shows the motion of the moons over 75 hours from 6 PM on the 6th. The left pane of the video is the view from Earth, the right panel is the view looking down on the south pole of Jupiter. You will notice that at about 03:40 the moon marked I (Io) disappears behind the planet and reappears later. Moon II (Europa) does a similar act. For an observer on these moons the Sun was eclipsed by Jupiter. Both these moons also pass across the face of the planet, sometimes casting a shadow. The other moons are III Ganymede and IV Callisto. 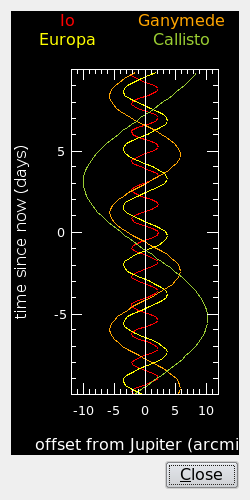 Galileo made a series of drawings of the planet and its moons over time. From this information he was able to derive the orbital period of the moons and demonstrate that they orbited Jupiter and not the Sun. The orbits of both Jupiter and its moons are very well known now. Astronomers can now plot in advance exactly where to expect he moons in relation to Jupiter. A typical presentation of this information is shown above for five days either side of 6 June. The vertical centre line represents Jupiter, and the four coloured, waving lines give the position of the moons. Time is read off the left axis.

I hope this guided observation session has whet your appetite as it did mine the first time I gazed upon the largest of our celestial companions. If you want a better look your local astronomy club can offer guidance and often rental telescopes.

The finder chart and other static views were created using Stellarium. Stellarium is available for Windows, Mac OS X, and Linux. The Jupiter moons animation was created using XEphem, post-processed with ImageMagick and Mplayer. The plot of future moon positions was extracted from KStars.